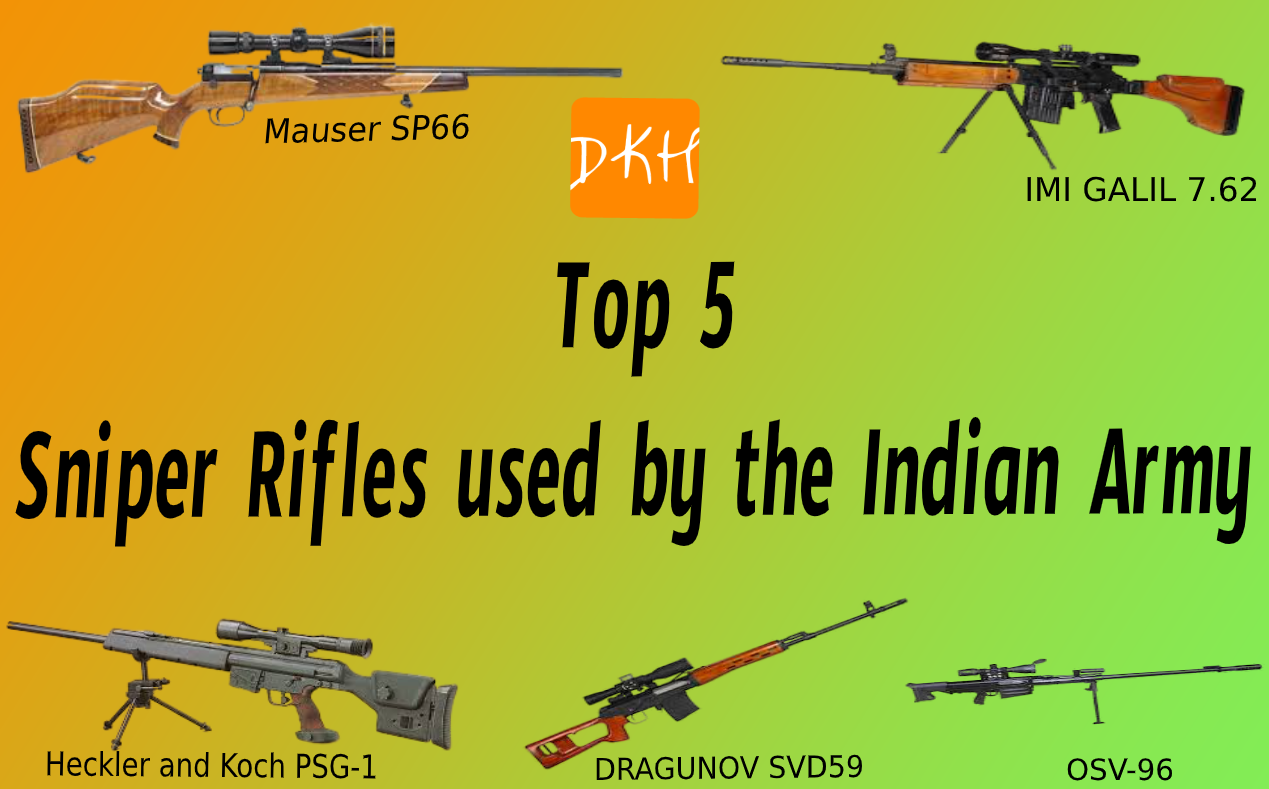 The snipers in any country’s military play a vital role. Every country uses snipers in its military. The snipers are the major contributors to get control over any situation during the war. Other than the snipers, the sniping rifles, which the snipers use, have a vast contribution in completing this important task.

One of the top sniper action rifles is Mauser SP66. It is of German origin, developed by Mauser in the mid-1970s from a traditional hunting rifle. It fires 7.62×51mm NATO rounds from an integral 3 round magazine box. Being a bolt action rifle and rotating bolt, it is highly accurate as the short bolt actions end up with fast follow up shots. It is highly efficient and its range is up to 800 meters. Its length is 1120mm. The barrel length is 730mm. An inbuilt adjustable scope is attached to it. It weighs around 6.12kg with the scope and without a bipod. It has a fully redesigned chassis and has a multi-slotted muzzle brake. It has a highly adjustable thumbhole stock. The bipod is an accessory that could be used to fire from the ground which provides a little stability to fire. It is used by the Standard Sniper Rifle.

Another powerful rifle is IMI GALIL 7.62 also known as the Galat’z. It is an Israel origin sniper action rifle. Yisrael Galil and Yaacov Lior had it delineated in the 1960s and was created by the Israel Military Industries Ltd. It is a semi-automatic sniper rifle. It is gas-operated and has a rotating bolt. It has either 5.56 or 7.62×51mm NATO firing rounds from a 10 to 25 round magazine. It is comparatively less accurate than a bolt action sniper rifle. It has rapid follow up shots. The actual length of the sniper rifle is 1115mm with the stock extended and with the stock bent it is 840mm. The barrel length is 535mm. It weighs 6.4kg without any optics. The muzzle velocity is approximately 815m/s. It also has a side-folding adjustable stock. Nimrod 6×40 scope can be attached. Bipods can also be attached. Its firing range is effective from 300 to 500 meters. This rifle is used by MARCOS and GARUD commandos of the special forces.

The PSG-1 is a cold war rifle of German origin. It was the first sniper rifle designed from scratch in 1972 by Heckler and Koch. The PSG-1 stands for “Präzisions Scharfschützengewehr 1” which is German is “precision sniper rifle 1”. It is a semi-automatic sniper action rifle. The rifle is gas-operated and roller locked delayed blowback. It fires 7.62×51mm NATO rounds from 5 to 20 round magazine boxes. It has better accuracy than match grade and with proper ammunition 0.5, MOA could be attained. The maximum range wherein it can be effective is said to be 1000 meters(1km). But with the scope attached, it can be used up to only 600m and in practice either for 300m or less. Has fixed stock which could be later adjusted according to requirements. The length of it is 1208mm with a width of 59mm. The barrel length is 650mm. It weighs 8.1kg without any attachments. The muzzle velocity is around 820m/s. The scope could be attached and there is no iron sight. Bipod could be attached. It is used by NSG commandos, MARCOS commandos, and the Army in the Armed forces of India.

The sniper was developed in the Soviet Union in the year 1963 by Yevgeny Dragunov. It is also known as the Designated Marksman Rifle. It is again a semi-automatic sniper’s rifle. It fires 7.62×54mm NATO rounds from a 10 round magazine box. It is a gas-operated, rotating bolt action rifle. It is very accurate with less than 1.24 MOA. The effective firing range is approximately 800m. It has a stationed adjustable stock. Different sights can be attached to it. The length of it is 1225mm. The barrel length is 620mm. It weighs around 4.68kg without attachments. The muzzle velocity is 830m/s. Bipod could be attached. It is used by Designated Marksman in the Indian Army.

It is the sniper with Soviet Union Origin. It was designed by A. G. Shipunov in 1990 and manufactured by KBP Instrument Design Bureau. It is a massive semi-automatic sniping rifle and direct impingement gas-operated and rotating bolt action. It fires 12.7×108mm NATO rounds from 5 round magazines. It is accurate but when larger caliber cartridges are used its accuracy decreases. The OSV-96 sniper rifle’s effective firing range is up to 2000 meters. Distinctive sniper sights could be mounted on it. The actual length of the rifle is 1746mm. It makes it difficult for transportation so it could also be folded into a compartment to shorten its length while transportation. The barrel is 1000mm long. The weight of the sniper rifle is 12.9kg which is almost equivalent to 13kg, which makes it difficult to be carried around. The muzzle velocity is 870 to 910 m/s. Bipod is most probably used a lot with this sniper rifle. It is used by MARCOS commandos in the Indian Armed Forces.

These are the top five sniping rifles used by the Indian Armed forces. These rifles are extremely difficult to operate and for their operation of, very talented soldiers are appointed with special skills.

One thought on “Top 5 Sniper Rifles used by the Indian Army!”