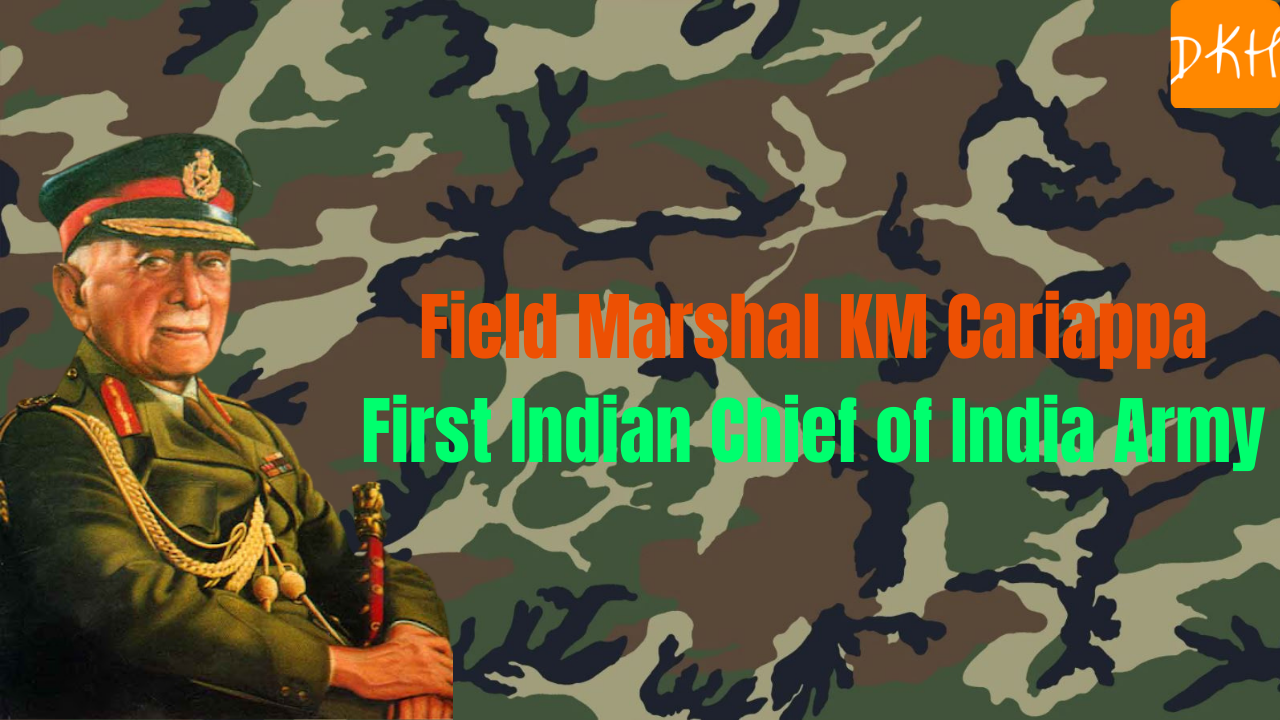 His illustrious military career lasted over thirty years. Cariappa joined the British Indian Army shortly after the end of World War I and was commissioned as a temporary first lieutenant into the 2/88 Carnatic Infantry. He was born on January 28, 1899, in Madikeri, Kodagu. Early in his career, he was transferred among many regiments until landing on the 1/7 Rajputs, which became his permanent unit.

He was the first Indian to attend the Staff College in Quetta, the first Indian to command a battalion, and one of the first two Indians to attend the Imperial Defence College in Camberley. He performed as a staff member at several unit and command headquarters (HQ) as well as the General Headquarters in New Delhi. Cariappa was the commander of the Indian Army’s Eastern and Western Commands before becoming the C-in-C of the Indian Army.

BRIEF ABOUT HIS PERSONAL LIFE:

Cariappa was born on January 28, 1899, in Shanivarsanthe, Coorg Province (modern-day Kodagu district), to a Kodava clan farmer family. Madappa, his father, worked in the tax department. Cariappa was the second of four sons and two girls in his family.

To his relatives, he was known as “Chimma.” In 1917, he graduated from Central High School in Madikeri and went on to Presidency College in Chennai to further his study. He discovered throughout college that Indians were being recruited into the Army and would be trained in India. He applied for the training because he wanted to be a soldier. Cariappa was one of 42 students accepted into the Daly Cadet College in Indore out of a total of 70 candidates. He excelled in all facets of his training and received a seventh-place finish in his class.

Cariappa married Muthu Machia, the daughter of a forest official, at Secunderabad in March 1937. Though they had a lovely marriage at first, their marriage eventually fell apart due to an age difference of nearly 17 years, ideological conflicts, and Cariappa’s professional obligations. The couple split up in September 1945, although there was no formal divorce. Muthu died in an accident three years later.

Muthu and Cariappa had a son and a daughter. K.C. Cariappa, their son, was born on January 4, 1938, and Nalini, on February 23, 1948. “Nanda,” their son, joined the Indian Air Force and progressed through the ranks to the rank of Air Marshal.

Lieutenant General Biddanda Chengappa, the son of his sister Bollava Nanda also served in the Indian Army and retired as the GOC-in-Chief Northern Command.

Cariappa graduated on 1 December 1919 and was granted a temporary commission. This was done to make Cariappa’s rank junior to the officers who passed out from Royal Military College, Sandhurst on 16 July 1920. On his return to India, Cariappa was posted to the 37th Dogras in June 1922. In June 1923, Cariappa was transferred to the 1/7 Rajputs, which became his permanent regimental home.

In 1925, Cariappa went on a world tour to Europe as well as the United States, Japan, and China. In 1927, Cariappa was promoted to Captain, but the appointment was not officially gazetted until 1931. Cariappa was appointed as the deputy assistant quartermaster general at HQ Peshawar District in 1931. In August 1943, when the South East Asia Command was formed, and the Fourteenth Army was placed under it, Cariappa volunteered for active service in the war. On 1 November 1944, Cariappa was promoted to the acting rank of Brigadier but was not given the command of a brigade as expected. Though Cariappa was not happy with the appointment initially and protested to the Military Secretary, the experience proved to help when he took over as the C-in-C four years later. This gave the British hierarchy a chance to assess Cariappa.

On 1 May 1945, Cariappa was promoted to brigadier, becoming the first Indian officer to fully attain the rank. Finally, in November, Cariappa was made the commander of the Bannu Frontier Brigade in Waziristan. Nehru was impressed by Cariappa’s way of dealing with the tribes. When Cariappa visited one of the camps that held INA prisoners, he was moved by the conditions in which they lived.

In January 1948, owing to the worsening situation in Kashmir, Cariappa was called back to the capital and appointed as the GOC-in-C Delhi and East Punjab Command. He appointed Lt Gen Kodandera Subayya Thimayya as the GOC Jammu and Kashmir Force, and Atma Singh as the GOC Jammu Division. Plans were laid to drive out the Pakistani forces from Kashmir completely, but they were stopped by the intervention of the United States.

Cariappa protested against this, stating that this policy would threaten Leh, Kargil, and ultimately the Kashmir Valley, which would put the country’s security at stake. Though Cariappa asked for two brigades to continue offensive strikes, he was provided only one and permitted to advance to Kargil. Cariappa continued several operations and offensive strikes against the Pakistanis, which involved high risk.

Since both declined the offer, Cariappa took over as the first native Commander-in-Chief of the Indian Army.

There is so much more to know about him. As a person, he had this very admiring personality. He would never use the power of his position for personal reasons. A man of duties, discipline, courage, wisdom, and a great heart which makes him a perfect combination for the role of Field Marshall.