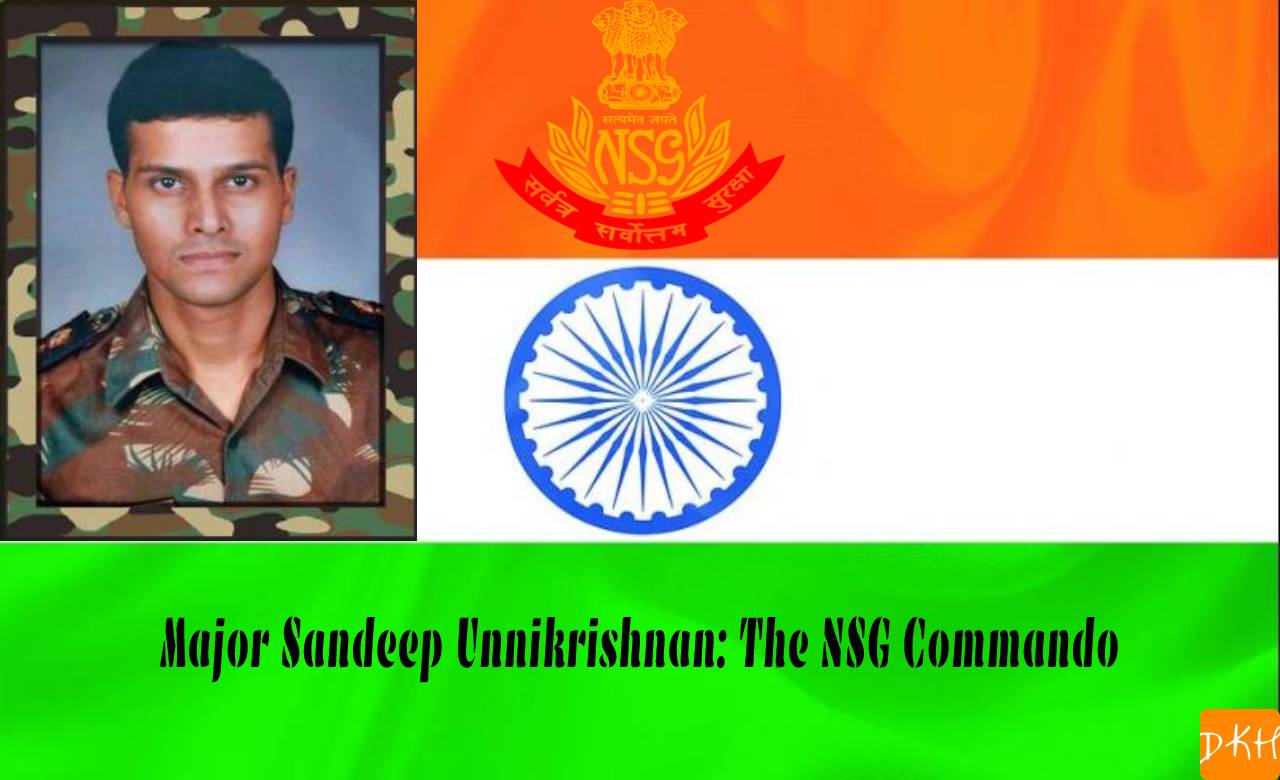 Major Sandeep Unnikrishnan: The NSG Commando A Little Brief on Him

Major Sandeep Unnikrishnan was an Indian Army officer who served in the National Security Guards’ world-class Special Action Group. He was martyred in real life during the November 2008 Mumbai assaults. He was thus granted the Ashoka Chakra, India’s most noteworthy peacetime heroism grant, on 26 January 2009 by President Pratibha Patil.

Major Sandeep Unnikrishnan came from a Malayali family dwelling in Bangalore, where they had moved from Cheruvannur, Kozhikode District in the territory of Kerala. He was the solitary child of resigned ISRO officials K. Unnikrishnan and Dhanalakshmi Unnikrishnan.

Major Sandeep went through 14 years at The Frank Anthony Public School, Bangalore prior to graduating in 1995 in the ISC Science stream. He needed to join the Army, in any event, going to class in a group cut. His friends and educators reviewed him just like a decent competitor who was dynamic in school exercises and games. He was likewise an individual from the school ensemble and appreciated watching films. Major Sandeep Unnikrishnan was hitched to Neha.

HIS SERVICE IN THE ARMY

In 1995, Sandeep Unnikrishnan enrolled at the National Defence Academy (India), Pune, Maharashtra. He was a member of the Oscar Squadron (No. 4 Battalion) and an alum of the 94th Course NDA. He holds a Bachelor of Arts degree. His NDA companions recollect him as “sacrificial”, “liberal” and “without a care in the world”.

In Indian Military Academy (IMA), Dehradun, he was the piece of the 104th normal course. On twelfth June 1999, he moved on from IMA and got charged as Lieutenant in the Seventh Battalion of the Bihar Regiment (Infantry) of Indian Army. During Operation Vijay in July 1999, he was respected decidedly at the forward posts even with weighty ordnance terminating and little arms fire by Pakistan troops. On the evening of 31 December 1999, Sandeep drove a group of six warriors and figured out how to set up a post 200 meters from the rival side and under direct perception and fire.

Sandeep Unnikrishnan got a considerable advancement to skipper on 12 June 2003, trailed by advancement to major on 13 June 2005. During the ‘Ghatak course’ (at the Commando Wing (Infantry School), Belgaum), which is considered as the most troublesome course of the Indian Army, Sandeep beat the course, acquiring a “Teacher Grading” and acclamation. He was additionally prepared in High Altitude Warfare School, Gulmarg. In the wake of serving in various areas including Siachen, Jammu and Kashmir, Gujarat (during 2002 Gujarat Riots), Hyderabad and Rajasthan, he was chosen to join the National Security Guards. On fruition of preparation, he was appointed as the preparation official of the 51 Special Action Group (51 SAG) of NSG, in January 2007 and furthermore took an interest in different tasks of the NSG.

THE MAN IN ACTION

On the evening of 26 November 2008, a few famous structures in South Mumbai were assaulted. One of the structures where prisoners were held was the 100-year-old Taj Mahal Palace Hotel. Major Sandeep Unnikrishnan was the group officer of 51 Special Action Group (51 SAG) sent in the lodging to save the prisoners. He entered the inn with a gathering of 10 commandos and arrived at the 6th floor through the flight of stairs.

Subsequent to clearing prisoners in the 6th and fifth floors, as the group plunged the steps, they presumed psychological oppressors in a room on the fourth floor, which was locked from within. As the commandos tore open the entryway, the round of fire by the fear mongers hit Commando Sunil Kumar Yadav in both legs.

Major Sandeep figured out how to save and clear Yadav, yet psychological oppressors vanished in the wake of shooting a projectile inside the room. Major Sandeep and his group kept emptying prisoners from the inn, for around the next 15 hours.

On 27th November, around 12 PM Major Sandeep and his group chose to take the way of the focal flight of stairs of the inn to go up, which they knew was a major danger, as they were uncovered from all sides of the lodging.

In any case, this was a danger they were able to take, as it was the best way to find the fear mongers and to save more prisoners who were caught inside the inn. True to form when psychological oppressors saw commandos coming up through the focal flight of stairs, they trapped the NSG group, from the primary floor, wherein Commando Sunil Kumar Jodha was heinously harmed.

Major Sandeep Unnikrishnan quickly orchestrated his clearing and kept on drawing in psychological oppressors in the firefight. He then, at that point chose to pursue psychological oppressors alone, as they were attempting to disappear to the following floor. In the experience that followed, he figured out how to corner every one of the four psychological militants to the Ballroom in the northern finish of Taj Mahal inn, without any assistance yet forfeited his own life in the course.

His final words were, “Don’t come up, I will deal with them” as indicated by the NSG authorities. NSG commandos later dispensed with each of the four psychological oppressors caught in the Ballroom and Wasabi café of the Mumbai Taj inn.