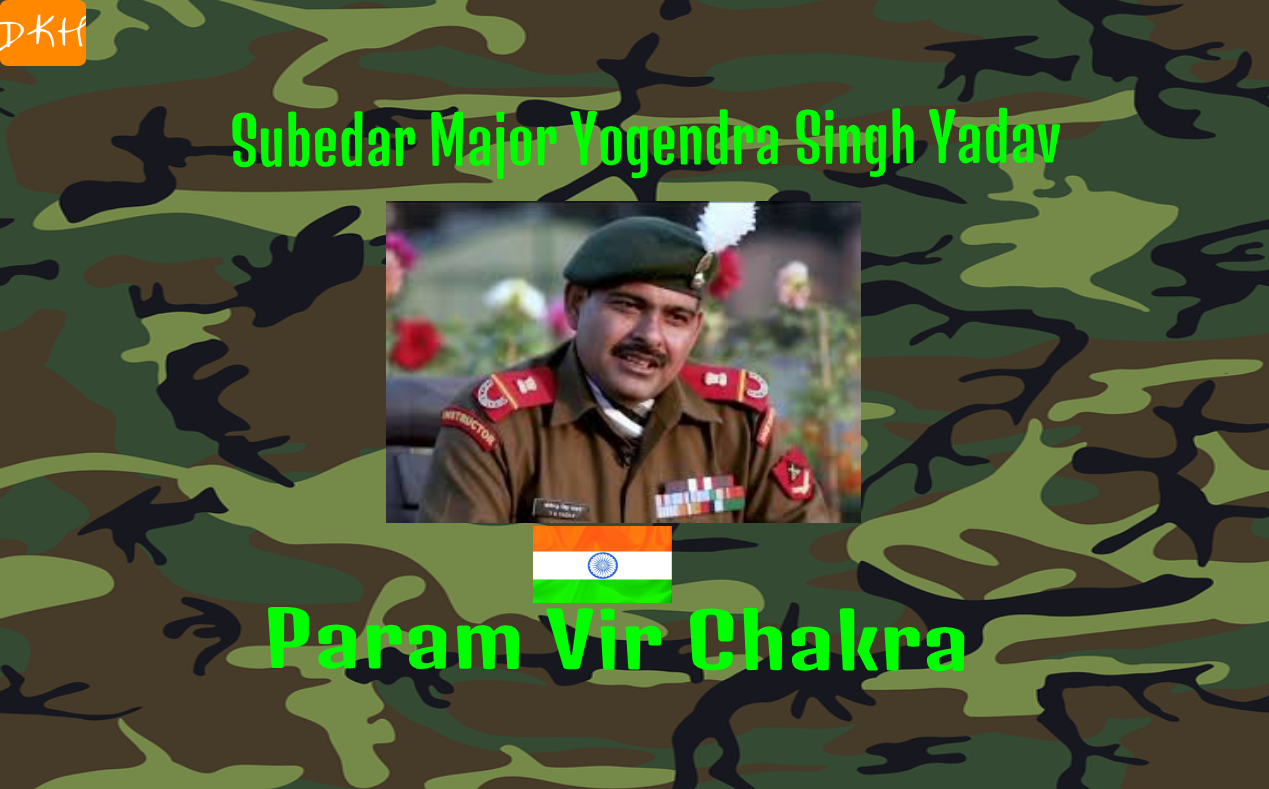 Yogendra Singh Yadav was conceived in the Ahir town of Sikandrabad in Aurangabad, Bulandshahr District of Uttar Pradesh. He was born on the 10th of May 1980. Yogendra Singh Yadav had a family background in the army. He has been listening to stories of war ever since he was a kid. His father Karan Singh Yadav had served in the Kumaon Regiment. He had participated in the 1965 and 1970’s Indo-Pak wars. Yogendra and his elder brother were extremely inspired by their father and they had a deep desire to join the Indian Army. He began his education at a village primary school, after class 5, joined Sannota Sri Krushna College, which was about 3km from his house. When Yogendra was still a kid, he had dreams of getting into the Indian Army and fighting in the wars.

When he was still in 11th grade, his elder brother got enrolled in the Army. After a year when he was in 12th and his brother came home for holidays, his brother asked him to try out for the Army. At the time his Internship was going on but despite that, his brother recommended him to try out for the forces.  At the time he was just 16 and a half years old and halfway through his 12th class, he left for the tryouts held during the recruitment in October. Yadav says that it was maybe a belief of his elder brother and his mother that if he goes for the tryouts, he will be selected in the first attempt itself.  His father thought otherwise. His father thought that he would be selected but not on the first attempt. As per his mother’s and brother’s belief, Yogendra Singh Yadav got selected in the first attempt itself. He gave the physical test, cleared that one, then gave the medical and then the written and results were completely in his favor. He cleared all the tests in his first attempt and got selected in the force. He was sent into the Grenadiers Regiment. He says that when he was in his 8th to 10th grade, they learned about the stories of the Grenadiers, regarding the stories of Abdul Hamid, Hoshiar Singh, and many other superheroes. He was so proud to be a part of the same Regiment.  After a yearlong training, he got posted into the 18 Grenadiers, which was located at that time in the Kashmir Valley.

In the year 1999, Yadav was on leave for two months and at that time he had not expected the tragic incident which was going to take place. Now during the leave of 2 months, when he was at home, his parents had decided to get him wedded on the 5th of May. His company commander, Major Rajesh Adhikari, had denied him because he didn’t have any left for that but he requested and told him to grant leave for 20 days as that much duration would be enough for him. During the time, the former Prime Minister of India, Atal Bihari Vajpayee did a trip through the bus to Lahore, which was only on the means to get the two countries to get back in good terms of everything.

So, at that time no one would have thought about what was Pakistan up to and what was going to happen. Indian citizens were expecting peace and calm relationships and a progressive outlook towards the end of this trip. But meanwhile, Pakistanis captured all the Chowkis of India in the Kargil territory by sheer sham. He had a dream that someone is running away with the Indian flag and there is a lot of firing going on from either side, meaning there were enemies on one side and on the other side where the Indian soldiers were. He shared this dream with his family members and they told him that is just because of the way he lives and his post. But later when he went to Jammu, he found out that his Battalion was sent to the Dras Region and this incident confirmed his suspicions of the dream he had. After gathering the information, when he went to his unit after 2 days, he found out that the unit was already fighting at the Tololing.

When he saw a fellow soldier being shot in the head and his body slowly coming down, he and the other soldiers got more furious since all the soldiers are a family, even if one dies everyone gets furious and ready to proceed further to fight for the lost life.  Thereupon, the company was divided into 2 and they were trying to capture the point from different directions by multiple attacks and division of enemy power. But in 22 days he had witnessed the loss of 2 officers, two JCOs, and 21 soldiers.

When Tololing was captured by 2 Rajputana Rifles and 13 Jammu and Kashmir Rifles, Yogendra’s Battalion was withdrawn to Ghumri, where they regained and repaired their equipment.,  right after 4 days, they got orders to attack the Tiger Hill, which was the highest peak of the Dras region, the bunkers from the enemies were set up at those places. With the lack of food supplies and necessary clothes and equipment, they were supposed to finish the task before the full moon or it would make the task more difficult. He chipped in for the errand of catching three vital fortifications on Tiger Hill, which were arranged at the head of a vertical, snow-shrouded, 16,500 feet high precipice face. He was climbing the high bluff with the assistance of a rope when the foe dugout lit rocket fire.

Yadav was hit by three bullets in his groin and shoulder. Yadav ascended and finished the remainder of 60 feet to hit the peak of the mountain, though seriously injured. In spite of the fact that he was in tremendous agony, Yadav crept to the principal adversary shelter and heaved an explosive, which slaughtered four Pakistani fighters and set back the foe fire. It offered the remainder of the Indian team an opportunity to scramble up the side of the mountain. Be that as it may, this was not it. Yadav kept on battling and obliterated the second shelter too with the assistance of two individual officers.

Actually, he likewise occupied a hand-to-hand battle with the foe and executed four additional Pakistani troopers. By the time the rest of the Indian platoon arrived, Yadav had already neutralized the enemy attack. This gave Indian warriors the high ground and they figured out how to achieve probably the hardest strategic Kargil war – The Capture of Tiger Hill. During the second piece of the battle, a couple of more shots hit Yadav. Some people say he was hit by 16 bullets, some say less, but he still survived it all. Yadav’s heroic actions were portrayed in the film, Lakshya, by actor Hrithik Roshan. He is our real Desh Ke Heroes