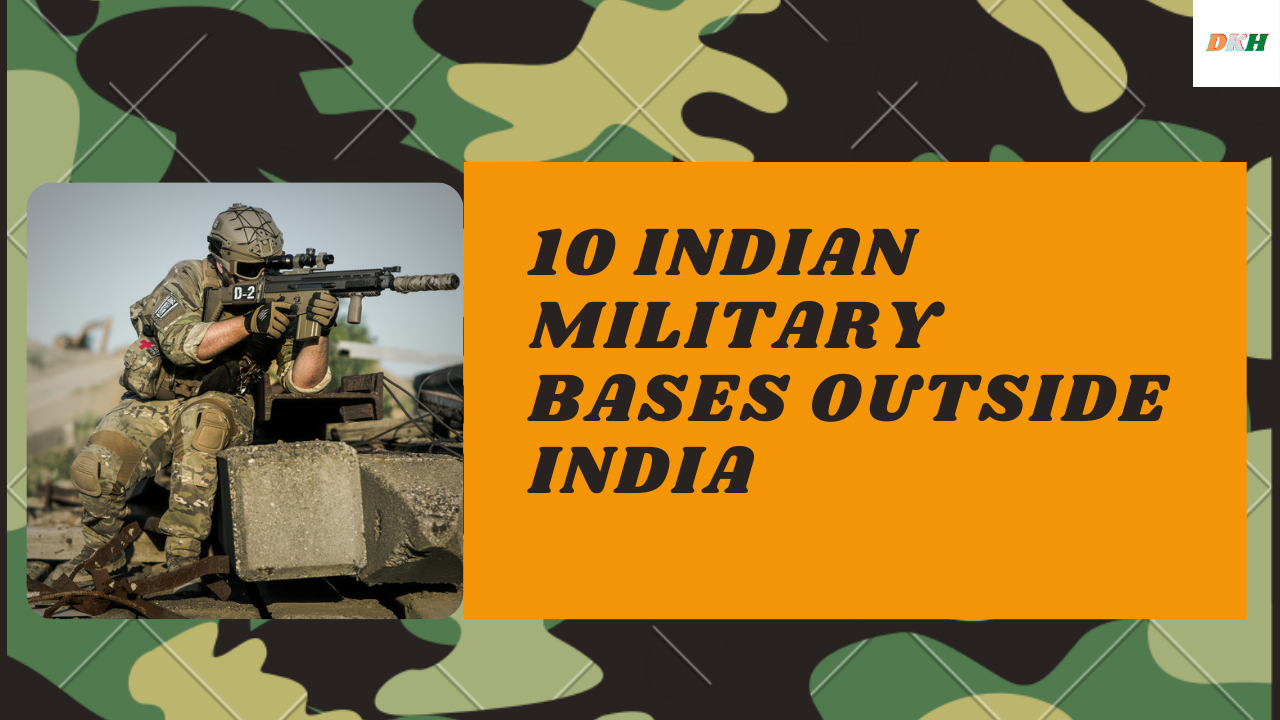 The establishment of military outposts in foreign countries lets a state exert power, for instance by conducting an expeditionary war, and thus influence the events in other nations.

The news reports frequently reveal that India operates a number of military bases in countries other than India.

These bases give us an advantage of strategic planning over a geographic region and are usually constructed as a part of our defense and diplomatic relationships. India makes use of these bases, not only for our own benefit as well as for training and equipping countries that host them. For instance, India has been training the military forces of our neighboring countries for many years now.

In the same way, we have also established bases and training institutions in these countries. These initiatives have proved to be successful for India and those countries too. One obvious example of this kind of bond is the relationship with Nepal. It is said that India will view any attack against Nepal like an assault on India itself and react to it in the same way.

We’ll take a look at the top 10 Indian military bases located outside of India.

Why do nations have military bases overseas?

The establishment of military outposts abroad can allow a country to demonstrate authority, for instance in the form of conducting an expeditionary war and thus influencing actions in other countries. They could be used as staging areas or for communications, logistical, or assistance with intelligence, based on the size of their infrastructure.

Numerous battles throughout recent history have resulted in world power creating a large number of bases for military operations abroad and the presence of these bases has assisted countries that have these bases in achieving their goals in the military and political spheres.

In both the First as well as Second World Wars, the British Empire, as well as other colonial powerhouses, established military bases abroad in a number of its colonies. They were helpful and sought rights to facilities when they were required to support strategic goals.

The establishment of coaling facilities for navy vessels was previously crucial. In the Cold War, the US, as well as the Soviet Union, set up military outposts wherever they could within their respective zones of influence. They also aggressively sought influence wherever it was needed. In recent times the War on Terror has resulted in the creation of overseas military outposts across the Middle East

ALSO READ: All Badges Of A PARA SF Commando in Indian Army

The Military’s Bases We Have Abroad

Farkhor Air Base is in Tajikistan located near Farkhor town. Farkhor. It is located about 130 kilometers east of Dushanbe the capital city of Tajikistan. It is managed jointly with both the Indian Air Force and the Tajik Air Force. It is India’s first military base. This Iranian Chabahar port Chabahar facilitates Indian goods to travel to Farkhor Air Base via Afghanistan.

Ayni Air Force Base, also called Gissar Air Base, is an airbase for the military located in Tajikistan situated 10 kilometers west of the capital city of Dushanbe. The base is operated jointly through Tajikistan Air Force and the Indian Air Force and the Tajik Air Force. It is India’s first airbase outside of India. Since 2014, India has been operating Su-30MKIs in small amounts at this base. The base was frequently used by the Indian Air Force as a standby base for their planes to transport Indian Nationals from Kabul Airport amid the Afghan Crisis

The country is in a positive connection to ours and as a result, our troops protect the country that is neighboring. In Surkhet Surkhet, it is where the Indian Air Force maintains an airstrip to protect them from threats from the air. We offer armament, hand-to-hand fighting, as well as high-altitude warfare training for Nepalese soldiers.

The Indian Military Training Team (IMTRAT) is located in western Bhutan’s Haa Dzong. This can be described as an Indian Army training operation in Bhutan. It is responsible for providing training to troops of the Royal Bhutan Army (RBA) as well as troops of the Royal Bodyguard of Bhutan troops (RBG).

The island of North Agalega Island, India is currently building a military facility. As part of the military cooperation, The island located within the Indian Ocean is leased to the Indian military for the purpose of developing strategically important assets.

In 2007 India created its first international listening station located in the northern part of Madagascar to monitor the movements of ships and listen to marine conversations within the Indian Ocean.

The Maldives are under the care of the Indian navy that keeps watching on the waters of the neighboring country. Its Coastal Surveillance Radar station protects against the threat of piracy within the waterways.

India as well as Seychelles have signed an agreement to build a naval base located on Assumption Island. Seychelles have received the $100 million line of credit from India and a Dornier aircraft. India is currently operating a coast surveillance radar in Seychelles.

Ras Al Hadd in India offers a listening facility and berthing privileges in the Muscat naval base. There’s also an operational facility for both an Indian Air Force and the Indian Navy at Duqm. It’s important to note that INS Mumbai previously had used Duqm as a port.

Chabahar Port is Iran’s sole oceanic port. It is located in the Gulf of Oman in south-eastern Iran. In December of 2018, India took over the port’s operations. Iran and India have signed a two billion dollar railway cooperation agreement in January of 2018. The agreement also includes a 600 million memorandum of agreement for Iran to acquire locomotives as well as cargo wagons for freight from India.

India, as well as Mozambique, have a close relationship with the military. At Mozambique’s participation in the African Union summit in Mozambique in 2003 as well as during the World Economic Forum, the Indian Navy was in charge of Mozambique’s maritime security.

As part of its national security strategy, India has always engaged in defense cooperating with foreign-friendly governments. Contacts, visits, exchanges and exercises, port calls, and facilitation of training are all a part of building and maintaining trust for mutual security.

Bases for military operations in these vital places would be a great additional benefit and could play a vital role in securing our military and trade interests. This is particularly so given China’s Chinese strategy of acquiring military bases in other countries. To fend off such a menace, we also need to quickly move in this direction. That’s the reason India is moving forward with plans similar to this.

Need to know about Paramilitary Forces of India