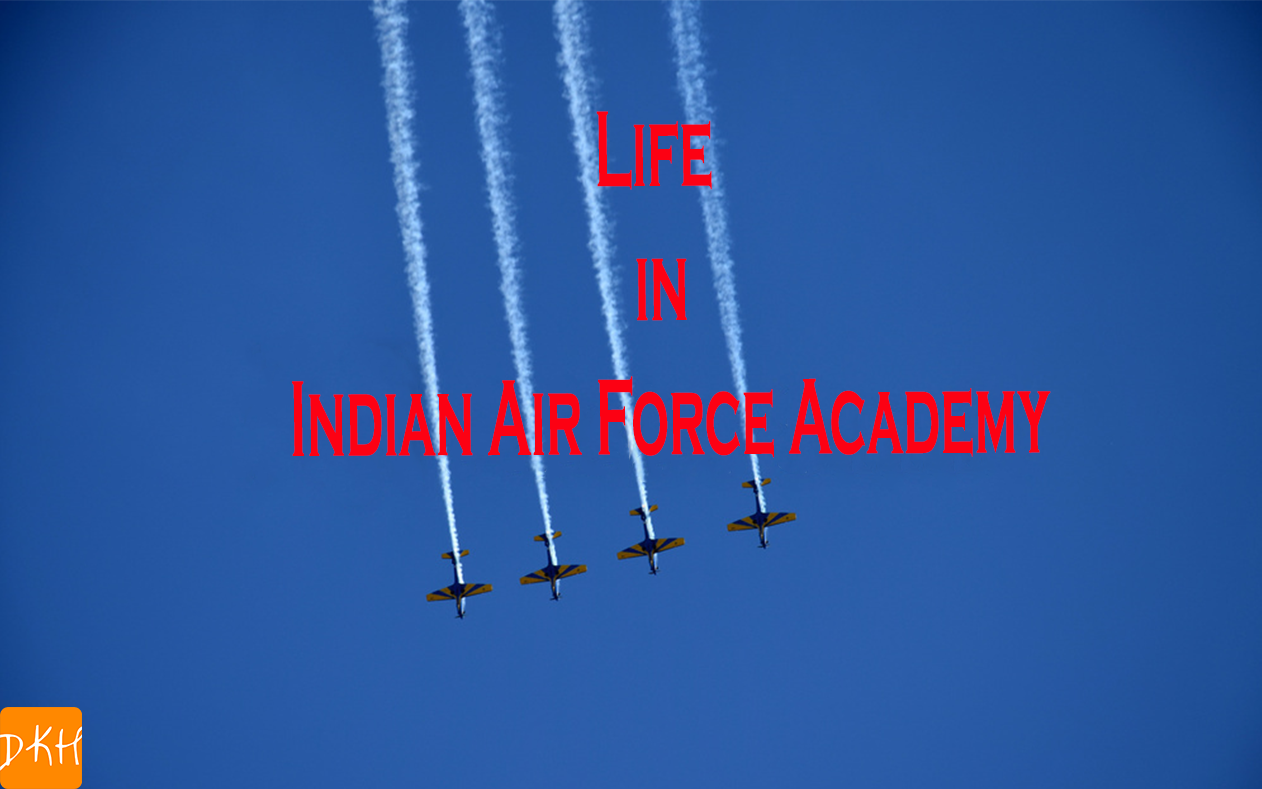 Air Force Academy is a premier training institute of the Indian Air Force. The journey of a flight cadet is filled with innumerable experiences, exciting, action-packed, and exhilarating. Let’s look into the making of an air warrior portraying glimpses of what we are, what we’ve been through, and what we will be.

The day of a flight cadet begins early in the morning as they prepare themselves for the grueling day of training ahead of them. Total seniors take it upon themselves to mold the junior cadets and instill in them the choice and the qualities that transform flight cadets into future officers.

The real sense of military bearing is drilled into the flight cadets as they go through their day in a diligent and efficient manner after the seniors gun the cadet’s outdoor training for the day begins with children followed by the drill. The drill is the bedrock of discipline, the sense of pop idioms, order, and the pride of the uniform is drilled into a flight cadet. In the drill square of the Academy, time management is an integral part of the defense life.

This quality is embedded in the flight cadets as they complete their tasks for the day in a given timeframe. Academics go hand in hand with physical training. The ground training faculty imparts training to groom the future administrative education, logistics accounts, and technical officers of the Indian Air Force. Through the portals of the flying faculty, future pilots of the Indian Air Force are born with state-of-the-art infrastructure.

The budding pilots are nurtured, trained, and guided by the instructors to become the future top girls of the Indian Air Force. It is here that the dreams of the cadets conquer the sky, take wings as they soar into the skies. After soaring the skies it’s time for toughening on the ground and here they are exploring the physical valor.

After the days of maintaining poise, becoming an air warrior isn’t easy. It takes hours, days, and months of physical strengthening and this is what the outdoor training provides for the cadets to push their physical limits going tougher by the day. The training is designed to make the cadets adopt it as a way of life, it improves their endurance, flexibility, and agility. It molds them into air warriors for being physically fit to take on the rigors of the service. One of the rigorous training is followed by games in which the cadets display their flair and expertise in various sports like volleyball, basketball, football, and hockey.

Among others, the flight cadets of the Air Force Academy are divided into six squadrons named after the former Commandants of the Academy each squadron has its own traditions and these quadrants compete against each other for the coveted Commandants banner.

Like the let’s get time for some self-indulgence, the fitness freaks hit the gym, facilitated with modern fitness equipment, it provides them with an ideal environment to build upon their physical fitness, recreational activities like indoor games, create avenues for relaxation and rejuvenates them. An in-house PCO and internet cafe helps the cadets be in touch with their loved ones, they indulge in some light reading in the cadet’s library, and then the study period with the room set up the cadet settles down with the nerd moon on preparing for the exams ahead.

All those pollen is when the whole squadron assembles at the squadron’s office and the orders are passed on by the squadron, as a tradition is held together by the entire Academy presided by the duty instructor of the day. Post the sumptuous dinner, the digestion process is fast-forwarded before the night. The day culminates with the night muster where each cadet is accounted for and the training orders for the coming day are passed apart from these daily mandatory activities. The cadets also take part in various inter squadron competitions to excel and bring glory to their respective squadrons.

The inter squadron athletic championship let’s lose the Usain Bolt’s of the Academy in clean and track events long distance as well as the shorter ones, the cross-country race test the physical stamina and the mental tenacity of the flight cadets spread across various terrains. The flight cadets run their hearts out for the pride of the color that they were Beckenbauer.

The Indus Quan aquatics championship gives the cadets the opportunity to showcase their swimming skills in various individual and team events and makes themselves and the squadron proud, The cadets get to socialize with the officers through various events by phone interpersonal skills and develop an overall personality. Dining in ninth is one such event where the cadets host the officers in the flight cadets mess and exhibit the best of the conduct and dining etiquettes over the grand evening.

Extracurricular activities are paid special attention to in the form of hobby clubs held two times a week. Music and dance, photography color, aero modeling, and archery provide the much-needed break from the grueling schedule of training to the flight cadets.

The fans’ enthusiasm in which the number three air force band and license enthrall the audience with a mastery of the various musical instruments. The challenge of camp Howard has been applied for every flight cadet as the training objective is to maintain efficiency under stress and strain sleepless nights are followed by days interspersed with a demonstration on Camp-related aspects briefing debriefing of exercises and preparation for night exercises.

The knighthood much comprises point-to-point night navigation and accurate navigation skills using maps, it tests the nocturnal skills of the flight cadets. Real skills like bayonet fighting and elementary moments are imparted to the flight cadets. These skills hold the cadets in good stead when the need arises for them to face the enemies.

These comprehensive tasks test the endurance grip and determination of the flight cadets. These events Shenton the bonds of camaraderie ignites the spark of initiative and enhances the qualities of leadership but most importantly it instills a sense of confidence and faith in the cadets about their capabilities.

The most grueling test of the cadets is the de route, a particular method-long event that takes place in the scorching heat of the sun. This is the ultimate test of physical stamina and mental endurance all the squadrons participate as a team and this event builds a sense of team spirit among the flight cadets.

The game culminates with the campfire, here the cadets let their hair loose and relive the best moments. Manoranjan is an event where the cadets showcase their talents as entertainers and display their various skills and tell the audience with magnificent performances. The inter squadron drill competition is conducted towards the end of the term where the squadrons put their best foot forward and showcase their drill standards. It is a visual spectacle where the flight matches in sync with the beats given life by the Air Force Band.

The training activities culminate in the grand moment of the combined graduation parade. The cadets traverse from the moment they join as flight cadets till the time they marched through the portals of the Air Force Academy as they wear the ranks and emerge as proud air warriors of the Indian Air Force that incredible final moment of metamorphosis leading up to the final step as the cadet graduates into an air warrior, it is the end of the tenure of the cadets in the Academy but it is also the beginning of a long road ahead in this world of uncertainties. Only one thing can be certain, the Air Force Academy experience would have prepared them for any eventuality.

“Chin high ready to fly, so join the Indian Air Force to cut the sky”