Top 5 Indian Army Heroes and their Extra Tales of Bravery. 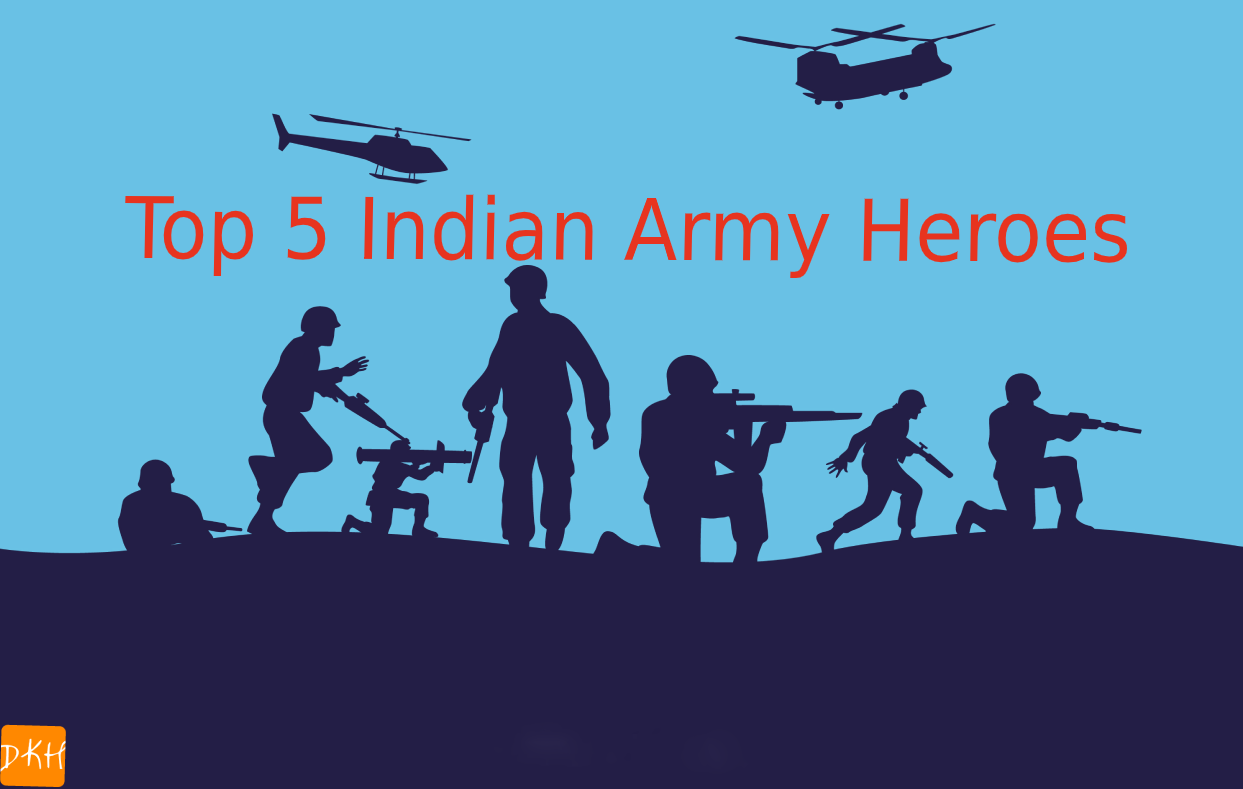 Far from home and from loved ones, these people are risking their own lives so that the whole country will sleep in peace. The stories of their courage, dedication, and devotions are larger than life. They are the legends whose tales will not just make your chests swell with pride, but whose sacrifices will leave your eyes a little moist. They are the real heroes, each and every one of them. But there are a few, whose lives have become the mark of legends, stories that deserve to be shared and told over and over again.

RIFLEMAN JASWANT SINGH RAWAT: A Hero Of the Indo-China war, Rifleman Jaswant Singh Rawat of the 4th Garhwal Rifles Infantry Regiment is the only soldier in the history of the Indian Army, who has ranked up even after his death. Jaswant Singh was promoted to the rank of Major General. Even after 40 years after his death, Jaswant is still believed to command and guide troops guarding India’s eastern frontiers with China. Throughout the 1962 war, soldiers were dealing with heavy casualties from the Chinese at Nuranang Battle. so they were commanded to evacuate their posts as soon as possible. But Jaswant did not leave his position and continued to fight even after other soldiers left.

Rawat was helped by two Monpa tribe girls named Sela and Nura. The triad had set up armament at separate points and perpetuated a volume of fire to cause the Chinese to accept they were confronting an immense unit. For three days in a row, Rawat succeeded in fooling them. But the Chinese found out about the setup through a man who used to supply rations to Rawat and the two girls. Rawat chose to shoot himself at this point, rather than being captured by Chinese forces. The Chinese were so enraged on discovering that they had been battling a solitary officer all along, so they chopped off Rawat’s head and conveyed it back to China. The post that Rawat held to rebuff the Chinese soldiers has been renamed Jaswant Garh in acknowledgment of his boldness.

SUBEDAR YOGENDRA SINGH YADAV: This courageous soldier has the great distinction of becoming the youngest recipient of the Param Vir Chakra. At the age of 19, he was awarded this honor for his actions during the Kargil War on 4 July 1999. Subedar Major Yogendra Singh Yadav was born in 1980 in Aurangabad, within the village of Ahir, Uttar Pradesh. He chipped in for the errand of catching three vital fortifications on Tiger Hill, which were arranged at the head of a vertical, snow-shrouded, 16,500 feet high precipice face. He was climbing the high bluff with the assistance of a rope when the foe dugout lit rocket fire. Yadav was hit by three bullets in his groin and shoulder.

Yadav ascended and finished the remainder of 60 feet to hit the peak of the mountain, though seriously injured. In spite of the fact that he was in tremendous agony, Yadav crept to the principal adversary shelter and heaved an explosive, which slaughtered four Pakistani fighters and set back the foe fire. It offered the remainder of the Indian team an opportunity to scramble up the side of the mountain. Be that as it may, this was not it. Yadav kept on battling and obliterated the second shelter too with the assistance of two individual officers. Actually, he likewise occupied a hand-to-hand battle with the foe and executed four additional Pakistani troopers. By the time the rest of the Indian platoon arrived, Yadav had already neutralized the enemy attack.

This gave Indian warriors the high ground and they figured out how to achieve probably the hardest strategic Kargil war – The Capture of Tiger Hill. During the second piece of the battle, a couple of more shots hit Yadav. Some people say he was hit by 16 bullets, some say less, but he still survived it all. Yadav’s heroic actions were portrayed in the film, Lakshya, by actor Hrithik Roshan.

BRIGADIER MOHAMMAD USMAN: He was Born in Bibipur, Uttar Pradesh, this man of steel joined the Indian army in 1934. During the Indo-Pakistan war of 1947/48, Brigadier Usman spurned a wild assault on Naushera and Jhanjar, two profoundly key areas in Jammu and Kashmir, and was named by his individual officers “The Lion of Naushera”. At the time of the Partition, he was given the offer of becoming the Chief of the Pakistani Army but he chose to stay in India. He left the Baloch regiment of Pakistan and was inducted into the Dogra regiment in India.

After the Battle of Naushera, where the Pakistanis endured overwhelming losses at his hands, a similar nation that had sought him to turn into the head of the military, presently felt free to put prize cash of Rs. 50,000 on his head. Not only was Brigadier Usman a tough soldier but he was also a caring man. He never got hitched and used to give a huge piece of his pay to help helpless kids and pay for their schooling. This rousing and model official of the Indian Army attained martyrdom on July 3, 1948, protecting Jhangar. In his final words, he said that he was dying but not to let the territory they were fighting for fall into the hands of the foe. He was accorded the Maha Vir Chakra after death for his incredible fearlessness and initiative.

MAJOR GENERAL IAN CARDOZO: Major General Ian Cardozo, who has numerous accomplishments to his name, will consistently be known for his huge fortitude in the 1971 war with Pakistan. He was, at that point, a youthful major with 5 Gorkha Rifles. During the war, he stepped on a landmine and severely injured his leg. Even when the doctor could not cut his leg, Cardozo asked for a khukri and did the task by himself of cutting his own leg off, saying, “Now go and bury it!”. The episode didn’t discourage Cardozo from proceeding to serve his nation.

Through sheer self-discipline and assurance, he kept on playing out his obligations as a trooper and turned into the primary incapacitated official in the Indian Army to order an infantry contingent and a detachment. Regardless of not being genuinely at standard with different officials, he vanquished many ‘two-legged’ troopers to start things out in numerous wellness tests during his spell in the military.

CAPTAIN VIKRAM BATRA: Born in Palampur, Himachal Pradesh, Captain Vikram Batra of 13 J&K Rifles, he is regarded as the hero of the Kargil War. He had a multi-faceted personality. He was splendid in studies, was a great athlete, and excellent in extra-curricular exercises. Truth be told, he had additionally spoken to his school in the Youth Parliament in Delhi. He drove one of the hardest war tasks in Kashmir and was likewise called “Sher Shah”. He was instrumental in recovering Peak 5140, which is situated at an elevation of 17,000 feet.

During this strategy, Batra was truly harmed yet at the same time figured out how to kill three aggressors in a close battle. Subsequent to catching Peak 5140, he went on one more troublesome strategic recovery Peak 4875 on July 7, 1999. Batra made a call to his dad before he left and informed him concerning the critical crucial. Scarcely did he realize this would be his last call home. It was one of the most troublesome missions the Indian armed force endeavored, in light of the fact that the Pakistani powers were sitting over the top at 16,000 feet and the trip inclination was 80 degrees. When they were ascending, one of Batra’s fellow officers was heavily injured. Batra set out to save him.

At the point when a Subedar attempted to assist him with sparing the official, Batra pushed him aside, saying, “You have children, step aside.” He saved his fellow soldier but was killed while clearing enemy positions. Batra’s final words were “Jai Mata Di.”