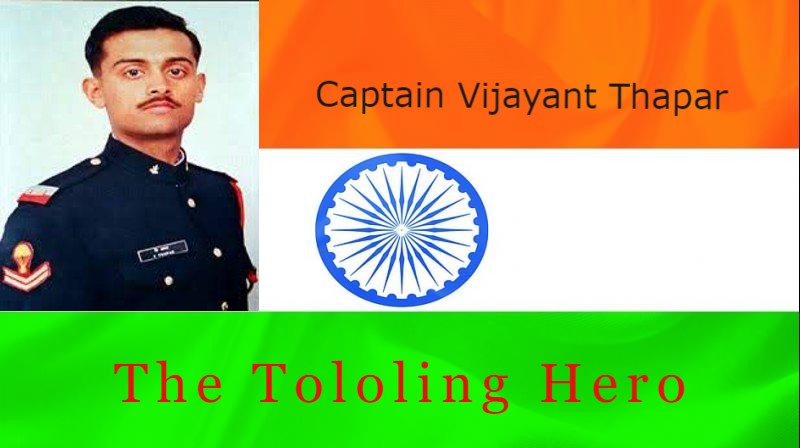 Captain Thapar, more commonly addressed as Robin by his family and close ones, was born on December 26, 1976, in Nangal in Punjab. He was the son of Colonel V. N. Thapar who is the son and grandson of army officers. When Robin was born, his father was posted at Pathankot with an Armoured Brigade. Thapar’s name has an interesting background. His name had to start with the letter ‘V’ and the first thing that came into mind was the main battle tank, the ‘Vijayant’. Vijayant right from his childhood was surrounded by army people. His uncle was an ace fighter pilot who was at the time posted at Pathankot too.

So, he was always drawn to join the Air Force and the Indian Army. As a child he wouldn’t play with toys, others of his age would play with them. His favorite toys were guns. At the age of 4 or 5, he also had his first time firing a pistol while he was sitting in his father’s lap. He would march around wearing his father’s peak cap and his cane, just like an officer. He enjoyed singing too and was a very religious human being. He would pray to god and he also mentioned that he’ll say god’s name as the last thing before his death. He had vowed that he would never consume alcohol, eggs, and meat and he would never even smoke. He would never do anything to drop down in his own eyes, he’ll make the nation proud. Robin was loved by everyone. He was a very happy-go-lucky person. Robin did his education from multiple places, Tara Hall, St. Mary’s Academy (Meerut), St. Joseph’s Academy, Army Public School, and Then DAV College Chandigarh. He graduated from Khalsa College, Delhi.

He used to watch formations of fighters shrieking past a few hundred feet above his house as a child. He did swimming and bodybuilding. He was believed to enjoy outdoor activities and nature and playing with his dogs and mocking the friendly baboons, in the garden in Barrackpore, a Military cantonment near Calcutta.

With immense hard work, he got selected in IMA, Dehradun, which was the best and his entire life. He was accorded different medals for different achievements here. He was very adventurous, he did parasailing, para jump and got a gold medal in water polo too. He won a silver medal for coming second in the first term. He was commissioned in December 1998, he joined 2 Rajputana Rifles at Gwalior. After a month there, he was shifted to Kupwara, Kashmir-the hotbed of terrorists for counter operations against them. These operations were major and intense. He was here involved in two fierce life and death encounters. Thapar, here met a young girl who remained silent and very much calm and curious to know the reason, he asked the girl’s school principal and he learned that Ruksana, lost her voice, when her father was assassinated by the Pakistanis right in front of her. In shock, she became mute. People say it was god’s grace or a soldier’s true affection and encouragement.

He was very much attached to Ruksana. Robin used to write letters during the war describing the situation at the time to his parents and even in his last letter to his parents he asked them to take care of Ruksana and send her Rs.50/- every month. Robin had maintained a diary, where he wrote a list of things he wanted to do. He used to follow them like they were rules. He was very disciplined. He helped Ruksana not for her but himself as he had this wish.

He had been there for just 3 months when he and his unit received orders to move to Kargil for the operation. On 25th May 1999, Vijayant was asked to move to Drass to vacate the occupied Tololing from Pakistanis. He moved to Drass with his unit under the guidance of the commanding officer Col. M. B. Ravindranath and Major Padmapani Acharya, the company commander. There were several attempts made to conquer back Tololing, but other units failed to do so. Captain Thapar led his platoon to Capture one such post called Barbad Bunker, after Mohit Saxena was held up in an initial assault on the night of 12th June 1999.

He was successful in doing his task, he had taken lead. After the victory of acquiring Tololing back, he was tasked to acquire 3 Pimples, Knoll in Black Rocks Complex, an ugly mountain in between Tiger Hill and Tololing. When they headed for the mission, it was a full moon night so there was enough light for them to be spotted by the enemies. Moreover, the path was very steep. It was almost as vertical as it could be. They had no cover on the way and the 6 Northern Light Infantry (Pakistani Troops) were at the height of 15,000ft, having all the advantages.

The ravines were deep and the temperature was -15 degrees Celsius. It was almost impossible to achieve this mission with the difficulties our brave men had their way. With the rage of the previous mission, where two enemies escaped and were still alive, the men in the unit were fired to go. The ambush started with an extreme artillery barrage of hundred guns, with Thapar’s unit leading it. The enemies had their counterattacks and did equally created damage to our unit. Robin lost a couple of his men in this attack and many got seriously wounded, which disrupted the attack. But Robin didn’t want to give up. He had this strong urge to fight back for all the loss and indomitable spirit and so with the remaining men, he moved through the ravine and rejoined his company. He and his team were separated from his company earlier. His company had secured a small foothold on the Knoll and while he was about to reach it, His company commander was killed.

This incident made him furious enough. After this incident, there was a firing for about 1 and a half hours where the Pakistanis had taken a step back. At this time Captain got an order on the wireless to move back but Captain was so furious that he denied following that since he believed that the enemies were weak at this point and hence, they could be defeated. So, the brave soul and his colleague Naik Tilak Singh left and then engaged the foes who were merely 15 meters away. There was constant firing from the two machine guns. When he was moving in for close combat, the continuous firing from the enemies struck his head and he fell straight into the arms of his comrade, Naik Singh. Following the incident, the unit attacked Knoll and obtained the victory, where many lives were lost. A total of 3 officers were killed and 3 were brutally injured, 10 of the ORs were killed and 42 others were wounded heavily.

The brave soldier sacrificed his life at the age of 22 years for the nation. India did win the battle but people didn’t celebrate because it won at a very high cost. Captain Vijayant Thapar attained martyrdom in the Dras region on June 29th, 1999. He was a brave and courageous soldier. Posthumously, he was awarded the Vir Chakra, one of the high gallantry awards by the President of India, K. R. Narayan, which was accepted by his 82-year-old grandmother. Approximately, 100,000 people from his hometown, Noida, attended his last rites. The army dedicated him to the helipad at Dras which is now known as Vijayant Helipad. His father visited the place where his soul left his body on his request mentioned in his last letter. He was very brave.