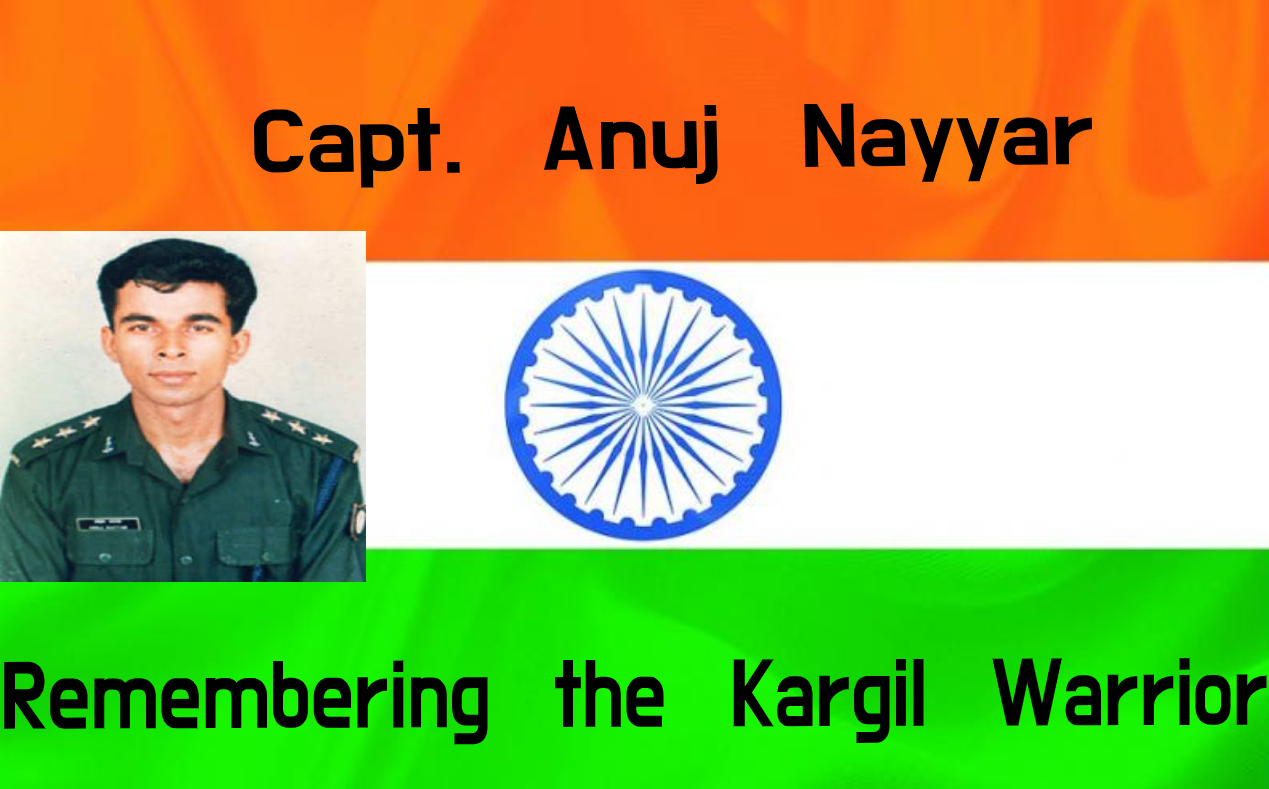 The Kargil War was a prepared clash among India and Pakistan that happened between May to July 1999 in the Kargil neighborhood of Kashmir and elsewhere along the Line Of Control. Kargil War is also known as Operation Vijay. Around 50,000 soldiers were a part of this war, of which around 527 soldiers were killed and many were seriously injured. The soldiers of the Indian Army sacrificed their lives during this war and one such warrior amongst them was Captain Anuj Nayyar. He was a young soldier and was 24 when he attained martyrdom but he had played a vital role in the war against Pakistan.

Captain Anuj Nayyar was born in Delhi on August 28th, 1975. Right from his childhood Anuj was a bright child and was consistently proving himself in academics and sports. His father, S. K. Nayyar was a visiting professor at Delhi School of Economics, and his mother, Meena Nayyar worked for the south campus library of Delhi University. Anuj did his preliminary education in Delhi’s Army Public School, Dhaula Kuan in the batch of 1993. After completing his education he got selected in the National Defence Academy(NDA) in June 1997. Captain’s training was done under the 90th Course, Echo Squadron. Finishing his NDA training, gentleman cadet Anuj Nayyar was commissioned through Indian Military Academy in June 1997. He got commissioned as a lieutenant into the 17th Battalion, Jat Regiment.

Captain had completed just about 2 years in the Indian Army when the Kargil War took place between India and Pakistan. In the year 1999, some intrusion was reported at the Kargil sector and this matter was considered seriously and actions were taken. An intrusion that might have been normal in the beginning was the reason for the war between the two countries India and Pakistan since the intruders were Pakistani militants.  In the month of June, Captain Anuj Nayyar, who was a junior officer in the 17th Battalion Jat Regiment, took the responsibility of vacating the Tiger Hills’ western Pt. 4875, which is also known as Pimple 11. At that time the pt. 4875 was captured by the Pakistani infiltrators. Captain Nayyar was one of the more than 50,000 Indian troops deployed in the region. The Kargil war was his first huge or extreme mission of his life. Securing Pt. 4875 was extremely important because its location could change the entire atmosphere of the war. It was very difficult to secure this position since Pt. 4875 stood at 15,990 feet above sea level. It had an extremely steep slope which made it difficult to reach the top. If even a small pebble was thrown from this height, it could deal damage more than a bullet.

Without the support of the Indian Air Force, it was considered next to impossible to conquer the pt.  and secure it. On 6th July, without waiting for any help, Captain Nayyar with his team left yo vacate the peak. In the initial phase of the assault on Pt. 4875, Captain’s team got seriously wounded by the encounter. From here the team was divided into 2 parts. One team was guided by the leader, Captain Vikram Batra and the other was under the leadership of Captain Anuj Nayyar. Nayyar, with his 7 teammates started moving towards the hill where Pakistani infiltrators had constructed several bunkers. Nayyar’s team faced heavy artillery and mortar fire from them. They had a really close encounter bringing more injuries. But the Pakistani infiltrators had to retreat due to the retaliation of the Indian soldiers.

During this entire mission, Captain Anuj had killed 9 Pakistani militants and had vandalized 3 medium machine gun bunkers. While he was destroying the fourth bunker, the enemy rocket-propelled grenade fell directly on Capitan, but he still did not give up. Even after being so seriously injured, Anuj went on with his fellow soldiers and vacated the final bunker.  He succumbed to his injuries but not before clearing the final bunker on Pt. 4875. Due to his deep injuries and wounds, Anuj could not make it out of it alive. He attained martyrdom at the age of 24, on July 7, 1999.

Not one soldier from Nayyar’s team of Charlie Company survived the Battle. After this, Pt.4875 was counter-attacked by the Pakistanis again but it was defeated successfully by Captain Batra this time. After this, the Pt. 4875 became the route to capture and secure the Tiger Hill and eradicate the Pakistani intruders from it. Pakistanis had to step back and evacuate since they had no other option.

Captain Anuj Nayyar was posthumously accorded the second highest gallantry award of India, the Mahavir Chakra, for his exemplary valor in combat during Operation Kargil. Today, in Delhi a road is named after him and it is called Captain Anuj Nayyar Marg. A study hall in Delhi Vishwavidiyalaya’s south campus is dedicated to him. There are schools named in his honor. He will be remembered for his service forever. Jai Hind.